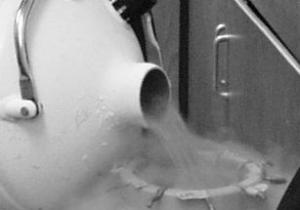 Mention ‘frozen semen’ to a lot of people, and you will see them pull a face.  Not a good face either.  They will probably look at you wide-eyed, with a startled and worried expression and say “Why on Earth would you want to use frozen semen?”  Well, why would you?  A great deal of stigma has surrounded the use of frozen semen for a number of years, and you will probably have heard a number of horror stories (or had some experiences) which make you believe that frozen semen should be avoided at all costs… perhaps it’s time to rethink:  You might be surprised by the benefits.

Frozen semen stocks can be built up while a stallion takes a break from competition or even while the stallion competes by “walking in” at a freezing centre while he continues with his normal training.  With popular stallions, balancing their competition and stud careers can be difficult, and sometimes a stallion is simply not able to produce enough sperm to keep up with demand on certain days.  This means you can often be presented with two unfortunate situations:

a) the stallion is “overbooked” or unavailable (due to competition commitments) and the stud says they are unable to send you any semen.  This results in a wasted cycle, and having to start again (and bearing the costs of doing so)

b) the stallion is “overbooked”, but the stud decide to split the ejaculate into a larger number of doses which consist of a below-optimal number of sperm cells.  This reduces the chance of getting your pregnant, and may lead to another cycle of insemination, shipping costs etc.

With frozen semen, these situations can be completely avoided, as the frozen semen is in storage ready to be sent out whenever it is needed.

On the other hand, frozen semen can be shipped in from all over the world with relative ease.  This gives you a truly worldwide choice of sires!

Part of the difficulty in an artificial insemination programme is getting the timing right.  Monitoring a mare daily so that you can call the stud to order semen the day before your vet thinks the mare might ovulate… some vets are better at it than others, and some mares are more predictable than others.  But it begs the question – why do all this only to be at the mercy of the Royal Mail or other delivery courier who might lose the semen, or deliver it late? Surely it would be better to have the semen sat there waiting for the mare to be ready… rather than the other way around?

Frozen semen can be in storage with a vet or AI centre long before it is needed, reducing the amount of stress as ovulation approaches, and removing the possibility of lost or late semen.

Anyone can send out chilled semen.  Literally, anyone.  No qualifications are needed, and people often begin sending out chilled semen without any training or experience whatsoever.  The result?  Sub-optimal, poorly prepared and poorly handled doses of chilled semen get sent out.  Mares don’t get pregnant.  Mare owners waste money.  Of course, this isn’t always the case, but it is a genuine concern.

On the other hand, the vast majority of freezing centres in the UK (and around the world) are staffed by highly trained, skilled, knowledgeable, and experienced technicians.  It also requires significant investment in infrastructure and equipment.  Semen can then be handled in the most correct manner from collection, through the processing and freezing stages, and be stored in an appropriate way.  You can be sure that frozen semen from these centres will be of the best possible quality.

One of the most exciting benefits of frozen semen is that because it can be stored indefinitely, that it makes deceased stallions available to breed from.  If you’ve missed the boat on breeding from a certain stallion, or a popular stallion has sadly departed before his time, then frozen semen allows you to breed from him after he is gone.

So with all these benefits, why on Earth has frozen semen got such a bad reputation?

Although equine semen has been frozen commercially for over 25 years, it’s only in the last few years that our understanding of how freezing actually works at a molecular level has improved sufficiently to make real progress in cryopreservation techniques.  Recent research has provided us with new chemicals to protect sperm cells during the freezing process, and set protocols for thawing to ensure maximum survival of the sperm cells.  The relative immaturity of the technology through the 1990s has unfortunately had an impact on the pregnancy rates achieved with semen frozen in that decade.  However, due to the improvements in freezing technology, pregnancy rates are now fast approaching those seen using chilled semen.  This too has been assisted by improvements in insemination protocols.

The lifespan of frozen sperm cells, once thawed and inside the mare, is less than that of fresh or chilled semen.  We don’t really know how much shorter the fertile lifespan of the sperm is, but the aim is to inseminate within 12 hours prior to, or 6 hours after, ovulation.

For years, this meant that vets would regularly have to scan the mares late into the night every few hours to pinpoint ovulation.  This can become rather expensive if your mare is not within a set-price AI package.  So some people attempt to breed using frozen semen without scanning, or keeping veterinary intervention to a minimum.  This method tends to remove the accuracy, and leads to poor pregnancy rates.  Because of this, frozen semen has gained a reputation for being expensive and/or as having poor conception rates.

In 2003 Dr Sandro Barbacini produced a paper on a new method of inseminating mares using a timed insemination protocol.  In this method, the mare was inseminated twice at set intervals after administration of hCG/Chorulon (a drug used to induce ovulation).  This avoided the need for scanning repeatedly, and produced pregnancy rates that were similar or better than using traditional methods.

Recent research has also shown that deep uterine insemination (a technique that can only performed by veterinarians due to the requirement for rectal palpation) does not improve pregnancy rates for frozen semen, and so insemination can be performed in the normal way (into the uterine body) by vets or AI technicians, and still achieve the highest possible pregnancy rates..

Post-thaw motility does not necessarily correlate with fertility, and so, when that was used as the sole indicator of potential fertility of frozen-thawed semen, a high number of semen with limited fertility was released for public use.  After relying solely on post-thaw motility for a number of years, we now have a huge range of laboratory tests that can be performed to help indicate how well sperm cells have survived the freeze-thaw process.  Although these tests cannot guarantee fertility, or give you a predicted conception rate, they allow us to prevent frozen semen that does not survive the thaw process very well from entering the public domain.  Together with accurate record keeping as to how well frozen semen from particular stallions is performing, this allows us to prevent poor quality frozen semen from being released to mare owners.

© 2012, Equine-Reproduction.com LLC
Use of article permitted only upon receipt of required permission and with necessary accreditation.
Please contact us for further details of article use requirements. Other conditions may apply.